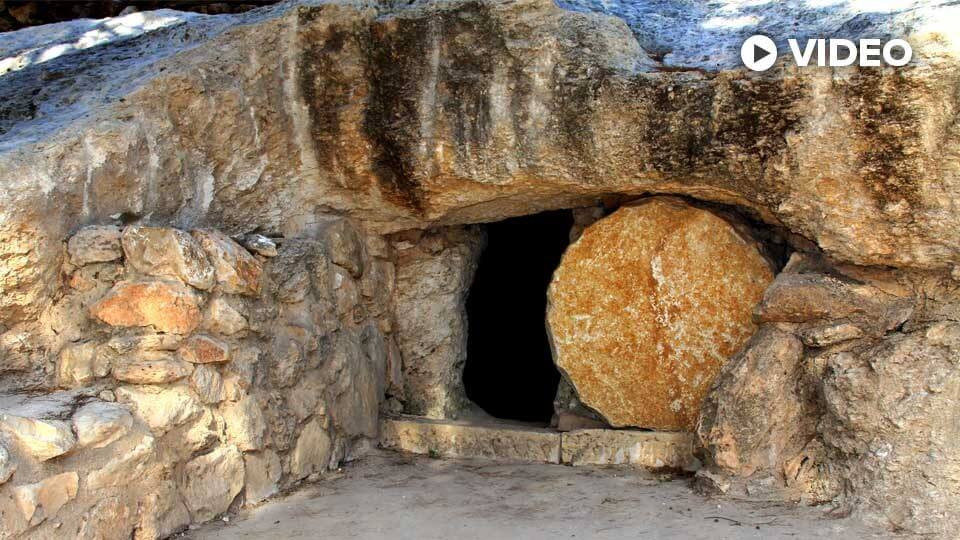 Many of us have heard the story of Christ’s burial and resurrection. Sadly, since we are removed from the historical context of this event, some of the details of the story can be lost to us. For example, the gospels tell us that Christ was buried in a tomb for three days. Have you ever given any thought to what the tomb of Jesus was actually like? Was it a gravesite like we use today or was it something different?

One way we can answer these questions is by looking at the scriptural text and then compare the text with archaeological findings. We’ll start our journey with a series of scriptures concerning the burial of Jesus. First, Matthew’s Gospel records:

There came a rich man from Arimathea, named Joseph, who had himself become a disciple of Jesus…Joseph took the body, wrapped it in a clean linen cloth, and placed it in his own new tomb that he had cut out of the rock . He rolled a big stone in front of the entrance and went away (Matthew 27:57, 59-60).

and also in the Gospel of John,

From these scriptures we can infer four truths about Jesus’ tomb:

Does archaeological evidence support this? YES.

This tomb in Jerusalem has a deceiving name because tomb has nothing to do with Herod or his family. Unfortunately, it was labeled as such due to the rich ornamental decorations found inside and the name has stuck ever since. What you can see here is this tomb has been cut out of the rock and has steps going down to the interior, suggesting that one might need to bend over to see inside. Also notice that it has a large stone that was used to seal the door. This tomb fits the description mentioned in Matthew very well. However, there are many tombs from the 1st century so we should not assume this was Christ’s tomb.

Let’s take a look at another scripture.

Looking at this scripture, we can add a fifth observation to how Jesus’ tomb must have been, that the burial cloths could be seen.

Just south of Jerusalem is a place called Akeldama. At this location there are many 1st century tombs which have also been cut out of the rocks. One very important tomb located here is the Tomb of Annas.

This is believed to be the tomb of the priest who was mentioned in the Gospel of John, one of the most powerful and wealthy men in Judea during the time of Christ. This tomb has also been cut out of the rock.

This tomb has small doors along the walls known as kokhim . During burial, the body was pushed head first into the tomb into the kokhim and a small slab would then be placed at the entrance with the person’s name written on it.

The body would be left there for about a year. After that, the bones would be removed, washed in wine and deposited in a bone box known as an ossuary box . This was because the kokhim were very expensive to produce. The ossuaries could then be stacked in the tomb and the kokhim could be used again.

Was Jesus buried in this type of tomb? To answer this, let’s look at another scripture.

[Mary] saw two angels in white, seated where Jesus’ body had been, one at the head and the other at the foot (John 20:12).

So what type of tomb could he have been buried in? Well, let’s look at another 1st century tomb.

The burial cloths could have been seen if the tomb where Jesus was buried was an arcosolium , or a shelf of rock where the body could be placed before being put in a kokh for burial, and if it was in line of site from the entrance. A strong case can be made for the arcosolium .

Lets summarize what we have learned:

Now that you have a good understanding of 1st century Jewish tombs, make sure you check out our accompanying blog Have Archaeologists Found the Tomb of Jesus where we explore possible locations for this historic event. Before you do that tell us what you think about this? Do you think Jesus was buried in an arcosolium or in another type of ancient tomb? Let us know your thoughts by commenting below.

*This blog was created from a video lecture given by Christopher Gornold-Smith.