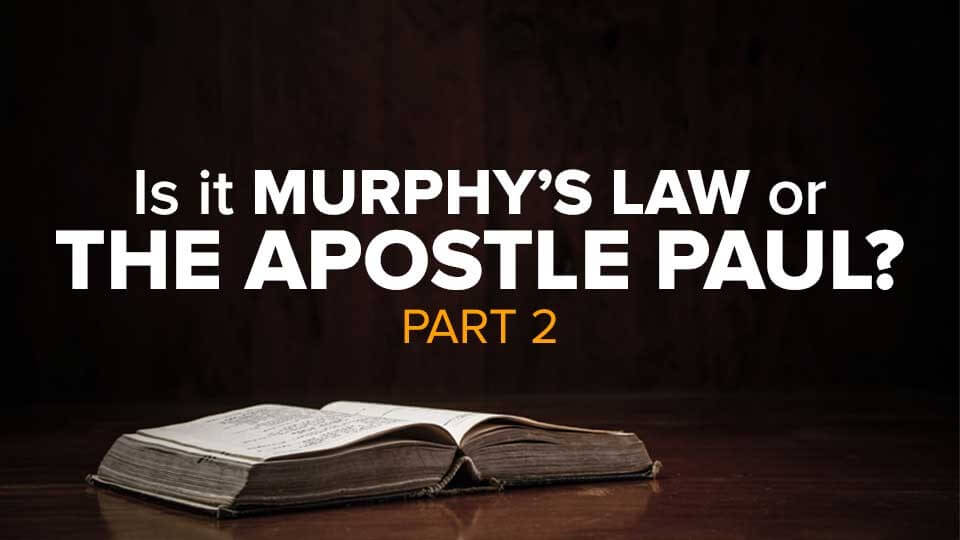 Is God Unfair in Working Good for Some and not for Others?

In Part 1 we argued that Paul’s use of an A—B—A’ literary structure to deliver the promise “All things work together for good” in Romans 8:28 serves two functions: first, it identifies God, not “chance” or “fate,” as the agent working together for good, and second, it restricts this promise to believers.

In this video we will address the charge that God is unfair because he has restricted his work for good to believers. If you missed Murphy’s Law vs. the Apostle Paul: Part 1 , I highly recommend that you read that blog post or watch the video first. A few mouse clicks and minutes will give a great foundation for Part 2. Don’t worry, I’ll be waiting right here until you come back!!

So, Let’s cut to the chase!

Is God unfair in working good for some and not for others?

I will argue that God is not unfair; instead, the question is unfair because it is predicated on ignorance of the original language and context.

If we are to acquit God of the charge of unfairness in His selective channeling of all events and circumstances and human choices for good, we must disabuse ourselves of our distorted notions of what Paul means by “good.” For most westerners, the English word “good” almost always translates into improvement of one’s lot in life. Something is “good” if it makes us healthier, wealthier, wittier, prettier, savvier, happier . . . well I think you get the point. The problem, of course, is that the apostle Paul had no clue that there would ever be such a language as English, let alone the specific word “good,” and still less our current Western connotations of it.

The word Paul uses is agathos . It occurs 102 times in the Greek New Testament, and almost half of those instances are in the writings of Paul. Nearly always the contexts suggest the sense of something that is “useful,” or “productive,” that is, something that fulfills the purpose for which it was intended [compare for example the “good” soil (Luke 11:13), the “good” slave (Luke 19:17), and the “good” will of God (Romans 12:5)]

The context of Romans 8:28 points us clearly in the same direction. Recall the back-end qualifying phrase with which Paul encases the promise “He (God) works all things together for good ”: “For those who are called according to his purpose.” “What,” we must ask, “is that purpose?” The following verses make clear that God’s predetermined (before the world began) purpose was to conform all those who love him into the image of His Son.

Since Jesus is the exact image of God, Paul is saying nothing less than that God has committed himself to assuring that everyone who loves him will live up to (and measure up to) God’s full intention for them. Nothing will thwart God’s purpose.

Even though our sin, like that of our progenitor Adam, marred the image of God in us, God Himself will work all things together (even our sin, but especially even the trials and tragedies of life) to conform us to His own image.

God’s predetermined intention to work all things together for good (that is, conformity to his image and eternal relationship with him) is offered to ALL people, so God cannot be accused of playing favorites.

God has sovereignly predetermined that He will force no one to be conformed to his image. This will happen only for those who voluntarily love him (is there any other way?) and desire him to conform them (i.e., those who love God) to his image. God is saying, “If you want it, I’ll make it happen—I will cause everything that happens in your life—even your own mistakes–to accomplish my will and purpose for you . . . but you have to want it.”

And who would not want it? I mean, to be like God. Think of it! How wonderful! Jesus’s disciples thought the very same thing, so I suppose we are in good company. Yes, they were thrilled at the prospect of being with God forever. “Lord,” they said, “Permit one of us to sit at your right and the other at your left in your glory.” [These were the seats of power, authority, and prestige on either side of the King’s throne]. They were requesting what most of us thought when we first read Paul’s promise “All things work together for good,” namely, “God is going to make us healthier, wealthier, wittier and prettier.” Jesus’ response is sobering:

“You don’t know what you are asking! Are you able to drink the cup I drink or be baptized with the baptism I experience?”

By “cup” and “baptism” Jesus is referring to his impending sacrificial death on the cross. The fact that two individuals were crucified with Jesus (one on his left and the other on his right) and Roman practice of providing victims of crucifixion with a kind of seat (sedalia) that supported some of the body’s weight (and actually prolonged the agony of the execution) has led some commentators to conclude that Jesus was driving home his point with stinging irony. In more direct speech, Jesus was saying: “You are seeking the SEATS of honor, prestige, and authority in the (fully consummated and eternal) kingdom of God, but the only path to them requires accepting the SEATS of rejection, humiliation, submission, suffering and death in the (already present, but not fully consummated) kingdom of God. So pay attention!! I am about to demonstrate this principle before your very eyes.” Probably within a matter of days, Jesus drank his “cup” to the bitter dregs. Having suffered the rejection of his own people and having endured the humiliation and agony of the cross, Jesus completed his earthly mission and cried out: “It is finished!!” This exclamation (one word in Greek) was written on bills to indicate that the debt had been paid in full.

Will believers one day be healthier, wealthier, wittier and prettier? Absolutely! But being conformed to the image of God involves something far more important than the external trappings of health, wealth, wit and fit. God is concerned that our nature becomes fully in tune with his. Jesus gives us the clearest window into the heart of God; He offered his life as a loving sacrifice for us. The prophet Isaiah described him as “A Man of sorrows, acquainted with grief” (Isaiah 53:3). Like Jesus, our path to glory will be “through many dangers, toils, and snares,” unlike Jesus, our paths include thousands of personal failures and countless sins. But for those of us who love Him, God will work it all to His effective purpose of conforming us to His image!

What do you think about this? Do you have a story of how God worked something in your life to work towards good? Let us know in the comment section below.