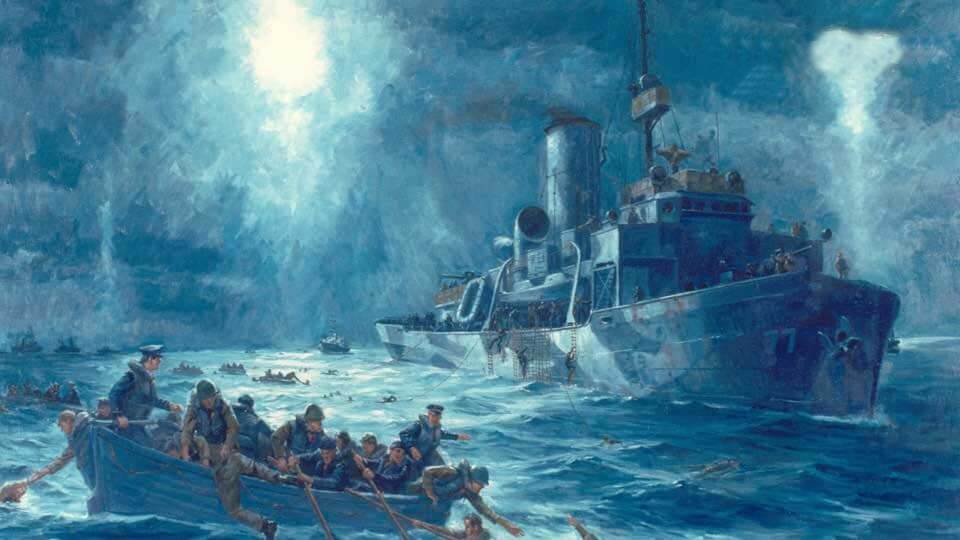 There are many forgotten or little known heroes in American history, men and women who gave of themselves so that others could enjoy freedom. We all have heard of such people as Nathan Hale and Jim Bowie who paid the ultimate price for freedom, but few know the story of The Four Military Chaplains and their last heroic acts on the U.S.A.T. Dorchester.

The Four Chaplains and the U.S.A.T. Dorchester

World War II was raging and the United States scrambled to transport troops to support its allies. The Dorchester, churned on through the night carrying nine hundred men–boys really– bound for Europe. Most tried to sleep between bouts of sea sickness. The chaplains walked the corridors attempting to bring comfort. It was February off the coast of Greenland and ice scraped the hulls of the Dorchester and its two companion ships.

Ice was not the only sound. The Coast Guard sonar had detected the unmistakable signal of a German U-Boat. And then there were more. The German wolf-pack fell in behind The Dorchester.

At 12:55 a.m. February 3, 1943, a torpedo rocked the vessel. The explosion tore through the hull and destroyed the electrical system. Below deck all was thrown into darkness and panic. The men scrambled upward toward the lifeboats. Few thought of anything except escape.

The Bravery of the Four Chaplains

In the midst of the confusion, the ship’s four chaplains Lieutenants George L. Fox, Alexander D. Goode, Clark V. Poling, and John P. Washington calmed the men, distributed life jackets and directed them to the boats. When the number of vests proved inadequate, the chaplains removed their own and gave them to the soldiers.

After the last boat was away, the chaplains (a priest, a rabbi, and two Protestant ministers) offered prayer for the remaining men. Some reports described hearing the prayers in Hebrew, Latin, and English.

“As I swam away from the ship, I looked back. The flares had lighted everything. The bow came up high and she slid under. The last thing I saw, the Four Chaplains were up there praying for the safety of the men. They had done all they could. I did not see them again.”

In less than thirty minutes, the USAT Dorchester sank with 672 men still aboard, the chaplains among them.

Few know of these men and their sacrifice, but in 1988 Congress honored them, declaring February 3 Four Chaplains Day . Their actions demonstrated an intent to express faith in more than words. “Greater love has no one than this. That he lay down his life for his friends.” (John 15:13)

What do you think about this? Do you know of any forgotten military heroes that you would like us to highlight? Let us know in the comment section below.

Learn more about the Four Chaplains and the U.S.A.T. Dorchester