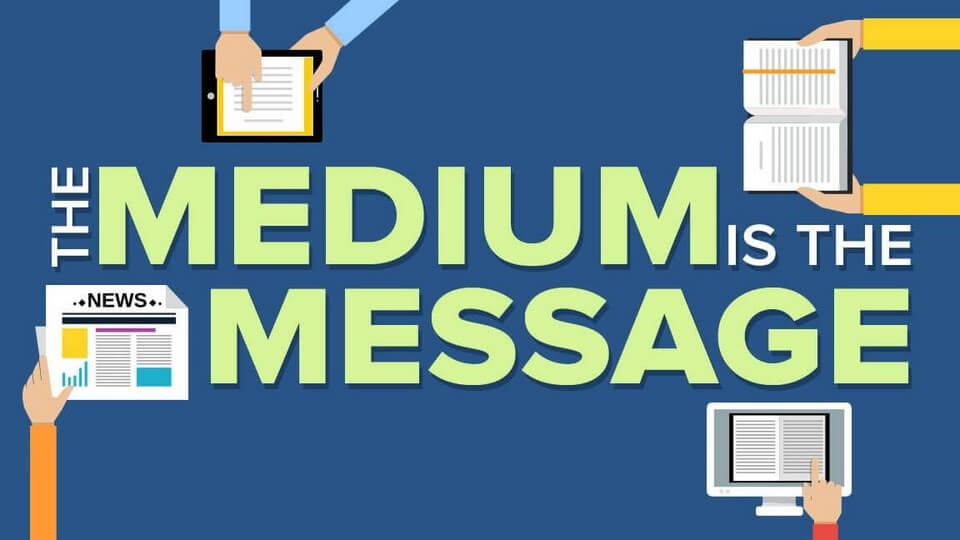 The Medium is the Message: How New Media Affects the Gospel

Being a professor in the Communication Arts Department here at SAGU allows me to spend a lot of time with my students on video, audio, lighting, and editing equipment. But as a Bible-based University, we are challenged to look beyond our cool gadgets and gear to the deeper issues of how methods of communication affect the Gospel message, the Church and our Christian worldview.

In the first of three video blogs, I want to look at the phrase “the medium is the message” and see if it can help us perceive the powers that shape us.

The phrase “the medium is the message” was first penned by author and cultural commentator Marshall McLuhan in 1964. Many at the time dismissed his thoughts as unusual and confusing.

Later in the 1970s, people took notice of his insights and wisdom. In fact, one Newsweek article at the time stated: “McLuhan’s theory of communication offers nothing less than an explanation of all human culture, past, present and future.”

Looking back at the last 40 years or so is it possible McLuhan, a devout Catholic, was a type of cultural communication prophet who was trying to tell us something nearly as important as the Gospel itself?

How New Media Affects the Gospel

When it comes to presenting the Gospel, it’s a common conception that as new communication models become available, the Gospel remains in an unalterable vacuum: “The methods always change, but the message stays the same.” Or “As long as we hold onto the unchanging gospel message, it doesn’t matter what medium or method is used to communicate it.” How many times have we heard these kinds of statements from preachers and teachers?

Not so says Marshall McLuhan: “The medium is the message,” he said. What does this phrase mean? In his book “Understanding Media: The Extensions of Man” he gave precise definition:

“Whenever methods or media change, the message automatically changes along with them.”

Could it be McLuhan was saying the Gospel message is changed or altered in some way with each new method or medium of communication over the centuries? By the end of part three of this video blog series we may discover an answer.

McLuhan was saying that the form of a medium embeds itself in the message, creating a symbiotic relationship by which the medium influences how the message is perceived. The medium itself, not the content it carries, should be the focus of study. Various forms of media shape and control the scale and form of human association and action. Taking the movie as an example, McLuhan argued that the way this medium played with conceptions of speed and time transformed “the world of sequence and connections into the world of creative configuration and structure.” Therefore the message of the movie medium is this transition from linear connections to visually creative configurations.

Likewise, McLuhan believed the message of a newscast about a heinous crime may be less about the individual news story itself — the content — and more about the change in public attitude towards crime that the newscast produces by the fact that such crimes are in effect being brought into the home to watch over dinner. A current example might be the chilling images and video clips being published on social media sites by ISIS terrorists in the Middle East. The medium of moving video images sends a much different message than a printed press release would have if the terrorist had chosen to share their evil deed to the world through just the written word.

“The content or message of any particular medium has about as much importance as the stenciling on the casing of an atomic bomb.”

He describes the “content” of a medium as a juicy piece of meat carried by the burglar to distract the watchdog of the mind. This means that people tend to focus on the obvious, which is the content, to provide us valuable information, but in the process, we largely miss the structural changes in our affairs that are introduced subtly, or over long periods of time. As society’s values, norms, and ways of doing things change because of the technology, it is then we realize the social implications of the medium.

Why is this understanding of “the medium is the message” particularly useful? We tend to notice changes – even slight changes (that unfortunately we often tend to discount in significance.) “The medium is the message” tells us that noticing change in our societal or cultural ground conditions indicates the presence of a new message, that is, the effects of a new medium. With this early warning, we can set out to characterize and identify the new medium before it becomes obvious to everyone – a process that often takes years or even decades. And if we discover that the new medium brings along effects that might be detrimental to our society or culture, we have the opportunity to influence the development and evolution of the new innovation before the effects becomes pervasive.

McLuhan reminds us, “Control over change would seem to consist in moving not with it but ahead of it. Anticipation gives the power to deflect and control force.”

In Part 2 of this series, we’ll take a look at form of media that dominated the Western world’s landscape of language for centuries, then dried up almost overnight, only to reappear again with resilient force that changed the Church’s view of God and the Gospel.

But before you check those out, what are your thoughts on phrase “the medium is the message”? Do you agree with McLuhan and his views on the power of the medium or do you have a different view of communication theory? Let us know by commenting below.

Learn More about The Medium is the Message:

*ThoughtHub is provided by SAGU, a private Christian university offering more than 60 Christ-centered academic programs – associates, bachelor’s and master’s and doctorate degrees in liberal arts and bible and church ministries..