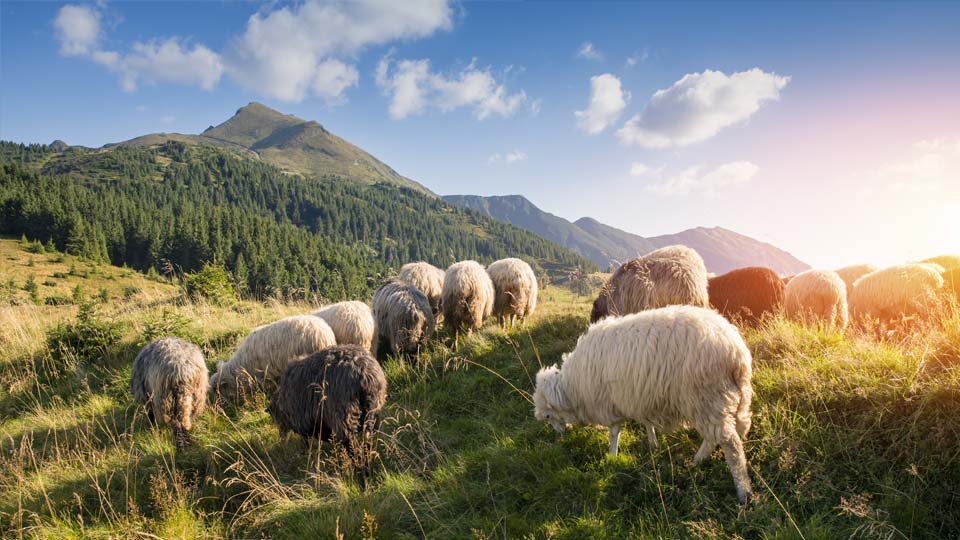 The Conceit of the Shepherd

The Bible reflects the importance of sheep in biblical society. The relationship between the sheep and the shepherd was one of intimate knowledge – the shepherd’s duty to watch over and care for each sheep was directly tied to the success of the owner.

A flock of sheep is not just a massive, homogenous unit of fluffiness; sheep were (and are) given names, and they learn the voice of the shepherd. In John 10:3, Jesus says, “The gatekeeper opens the gate for him, and the sheep recognize his voice and come to him. He calls his own sheep by name and leads them out.” In this passage, He was referring to an authentic, regular practice that his listeners would understand.

In poetry, imagery allows readers the ability to relate to and engage in what is being written. David, the shepherd-poet turned king, used imagery in masterful ways to show God’s grandeur and intimate care for us. Imagery and metaphor are often tied together as we see in the case of sheep in the Scripture. We can look at the Psalms, one of the most beloved books of poetry of all time, through various lenses of poetic form.

In poetry, imagery allows readers the ability to relate to and engage in what is being written.

One form of poetry is called a conceit. Conceit has nothing to do with the nature of a puffed-up person; rather, the term comes from the meaning of the word ratio, the Latin word for “concept.” A conceit is a poem comprised of an extended metaphor that stays with the parallel comparison of two objects or roles to paint a picture of a single concept. One of the most beloved Psalms is Psalm 23, which can be viewed as a classic conceit.

The Psalmist opens with “The Lord is my Shepherd; I shall not want.” The implicit trust in the role of the shepherd to provide for the sheep is addressed right away. The shepherd provides food, water, and rest. According to “The Basque Sheepherder and the Shepherd Psalm,” by James K. Wallace, Wallace interviewed a shepherd, Ferando D’Alfonso, and learned much about the provision the shepherd makes for his sheep.

Shepherds plan out the grazing for their flocks a day beforehand. They must have a plan of action as to what pastures they will head toward. As they lead sheep to a suitable pasture, they recognize the importance in starting the journey early to allow sufficient time for the sheep to graze on roughage as they progress to greener pastures. Sheep have no idea where they will search for food, but the shepherd leads them as needed. The same concept applies to finding water; conditions have to be favorable or else the sheep will resist. If a stream does not have a rock pool, a shepherd will make a pocket with his hands from which his sheep can drink.

As a whole, the character of the Lord as a trustworthy, concerned, caring Provider is illuminated for readers in David’s conceit as the role of the shepherd is seen as mirroring the constant watch of our Heavenly Father.

Other parts of the conceit work to further the parallel of sheep and shepherd and believer and Lord. When David writes, “He restoreth my soul…,” he may have been referring to the daily practice by which each sheep was petted and inspected by the shepherd; in other words, each sheep enjoyed a moment of communion with its shepherd that was specifically for its health and comfort. When he writes of the Valley of Death, Wallace notes: “There is an actual Valley of the Shadow of Death in Palestine… south of the Jericho Road leading from Jerusalem to the Dead Sea.” It is traversed to take sheep for seasonal grazing, but it is a narrow and treacherous route with “gullies seven or eight feet deep”; there is even a spot where the shepherd must get the sheep to jump. If they fall in the gully, the shepherd’s crook must be used to lift them out. If predators such as wild dogs should come near, the rod is employed defensively to keep them from taking sheep. Thus, the sheep knows the master will ensure their safety, even in dangerous landscapes.

And should the sheep get any cuts or abrasions during the daily trek, each is examined for such at the end of the day as they are returned to the fold. D’Alfonso notes that “at every sheepfold, there is a big earthen bowl of olive oil and a large jar of water. As the sheep come in for the night, they are led to a gate…as each sheep passes, he quickly examines it for briers in the ears, snags in the cheek, or weeping of the eyes from dust or scratches.” If any such sheep are discovered, they are then pulled out of line and cared for – its wounds washed and anointed with the oil. Once all the sheep are secured, “the shepherd places his staff within reach in case it is needed during the night. Then he wraps himself in his woolen robe and lies across the gateway, facing the sheep for his night’s repose.”

The conceit works well to maintain and expand the roles of the sheep versus the responsibility and reliability of the Provider. As a whole, the character of the Lord as a trustworthy, concerned, caring Provider is illuminated for readers in David’s conceit as the role of the shepherd is seen as mirroring the constant watch of our Heavenly Father. We shall not want.