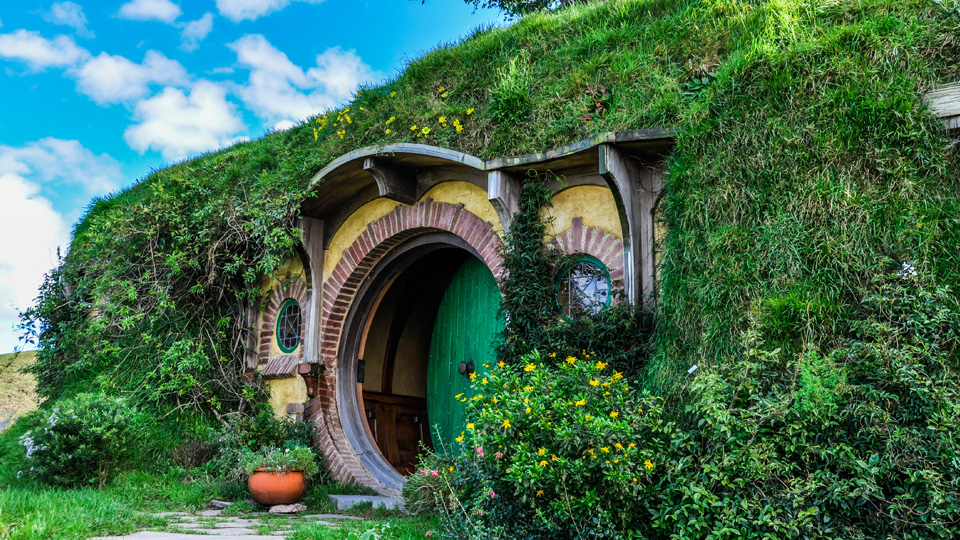 Not only did Tolkien weave real-world words and sounds into his constructed languages, but he also wove real-world legends into his languages and tales. These tales often initially wound their way into the story through the use of a name as seen in his previous quote: “To me a name comes ﬁrst, and the story follows.” Several names did not originate in the languages and cultures that he invented, but instead came from his reading of old literature as a philologist and academic. One of these names, possibly one of the first to influence his legendarium was Eärendil. Tolkien found this name in the Old English poem Crist. He was fascinated by these two lines:

He wove the name into his legends by making Eärendil a half-elf, half-man. Eärendil then saved the world (Beleriand) by sailing an impossible journey to beg for the Valar’s aid. His heroism earned him and his wife (also half-elven) the chance to choose whether they would live immortally in Aman (Heaven) like elves or die as humans. They both chose to be immortal. The background here affects readers/watchers of The Hobbit and The Lord of the Rings because this choice was also passed on to their two sons, Elros and Elrond. That’s right – the same Elrond in The Lord of the Rings. Elrond, the lord of Rivendell, is actually half-elf. He, obviously, chose immortality which his daughter Arwen later did not choose when extended the same option. His brother, Elros, chose to become mortal. He became the first king of Númenor – Aragorn’s 114x-great-grandfather. That is why Aragorn’s mother took him to Rivendell when he was just a baby – Elrond was his relative (very distantly).

Tolkien got several other familiar names from an Old Norse poem – the Völuspá – from the Poetic Edda (collection of Old Norse poems). The following lines of the poem come from stanzas 10-15 and 64:

Armed with such names, Tolkien created colorful characters to populate his stories.One other element of real-world legend snuck into Tolkien’s tales is actually hidden in a trick of the languages of Middle-Earth. As previously mentioned, Elros, Elrond’s brother, became the first king of Númenor. Númenor was established as an island nation in the great sea with Middle-Earth to the east and Aman (closer) to the west. As humans, they were told never to sail to Aman as only the elves were permitted to set foot there. For centuries, the Númenoreans were content, but eventually one king broke that commandment and tried to start a war with the Valar. Because of this transgression, the island nation was sunk into the sea. Surviving descendants of Elros established the Middle-Earth kingdoms of Gondor and Arnor and told the tale of the breaking of the world, the sinking of Númenor, and the danger of defying the Valar. They called this tale Akallabêth in their language, which means “the downfallen.” When the name is translated into Quenya (the language of the elves), it is called Atalantë. Doesn’t that sound like a legend you know about an island nation that sank beneath the sea?

As referenced early, Tolkien recognized that creating one language for the entire history of a very diverse and geographically expansive society would not be realistic, so he created language families. However, he also realized that multiple language families would interact in a variety of ways. One of the ways that variant languages interact is called digglossia. Digglossia occurs when two or more language variations (completely separate languages or just dialects of the same language) are used by the same society. Rather than have a confusing mix of the languages (think Joss Whedon’s Firefly), they become stratified in the society. Each variation will take on certain functions, typically labeled as high and low. High functions include religion, ceremony, politics, and other formal elements of culture. Low functions include everyday conversations, bartering, and other less formal elements of daily life. Since Tolkien’s elves divided into several different groups over their very long history, there are multiple variations of Elvish throughout Middle-Earth. During the third age (the time of the Hobbit and The Lord of the Rings), there are two elvish languages commonly spoken – Quenya (the “high” language) and Sindarin (the “low” language).

As was mentioned in a previous article, two groups of elves made it all the way to Aman – the Vanyar and the Noldor. The Noldor, though, eventually rebelled and actually killed other elves. For this, they were banished from Aman and forced to return to Middle-Earth. Among these elves was Galadriel, Lady of Light. Their language was Quenya. When they arrived in Beleriand, the elves they met (the Sindar) no longer spoke Quenya, but Sindarin. When the Sindar learned that the Noldor had slain their own kind, the king outlawed the Quenya language entirely. As a result, the Noldor learned and spoke Sindarin. Over time, Quenya returned, but only for high ceremonies like the naming of kings and queens. This digglossic relationship is evident throughout The Hobbit and The Lord of the Rings.

There are several instances of Quenya in the books and movies. In each case, the language is used for ceremonial, formal, and traditional purposes. For instance, when Frodo meets the elf Gildor, he uses a formal Quenya greeting, “Elen sɪ́la lumenn’ omentielvo.” When Galadriel says goodbye to Aragorn in Lothlorien, she uses the formal Quenya “Namarië.” In another instance, Frodo uses Quenya when he says, “Aiya Eärendil Elenion Ancalima!” to invoke the light of Eärendil to ward off Shelob in the pass of Cirith Ungol. Also, at the end of The Lord of the Rings, as Aragorn is crowned king, his coronation oath, an obviously formal ceremonial event, is in Quenya (I have no idea why Peter Jackson had him so awkwardly sing the oath in the movies).

Another element of digglossia in Middle-Earth can be seen in Aragorn’s names. Remember: Elrond’s brother Elros was the first in Aragorn’s royal ancestry. This line of kings spoke Adûnaic, but to honor their elvish ancestry, they used Quenya as their high language of ceremony just as the elves did; thus, each king of Númenor took a royal name in Quenya. Elros was Tar-Minyatur. Tar is the Quenya word for “king.” As the generations slowly became more conceited and more deluded by Sauron, they stopped taking their royal names in Quenya. The first king to take his royal name in Adûnaic called himself Ar-Adûnakhôr. One can still see the influence of Quenya on Adûnaic here: tar and ar both mean “king” in their respective languages. This was a double-insult. First, he forsook the high language as an insult to the elves. Second, his name meant “Lord of the West” – a title formerly only held by the king of the Valar. After that, Quenya became outlawed in Númenor, and a few generations later, Númenor was destroyed. Centuries later Aragorn was born. He was given the Sindarin name of Aragorn which means “Lord of the Tree.” He commonly went by the nickname Telcontar, also Sindarin, for “strider.” However, once he was crowned king, he took the royal name Ellessar. Ellessar is Quenya for “elfstone.” Thus, Aragorn continued the digglossic tradition of royal names that Elros started centuries earlier.