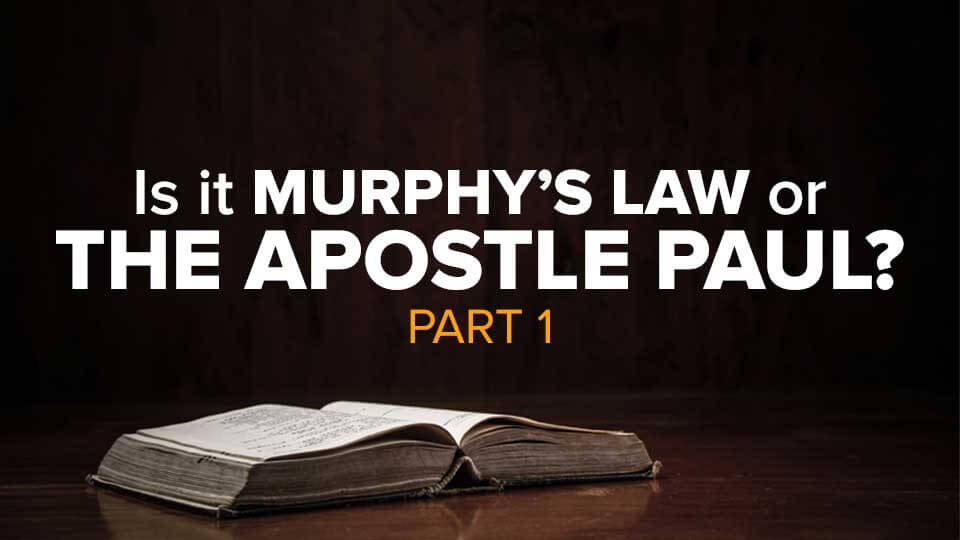 Do All Things Really Work Together for Good?

Murphy’s law says “If anything can go wrong, it will!” The Apostle Paul claims, “All things work together for good!” Whom should we trust?

Christians automatically side with the apostle Paul. After all, he is writing under the inspiration of the Holy Spirit. Yet, frequently this mental decision encounters a snag on its way to practical living. We don’t always live in accordance with what we say we believe.

“All things work together for good”? Really? Tell that to someone whose home was destroyed by a tornado, or to a man who lost his entire life savings in a Ponzi scam. In such cases, Murphy’s Law trumps the apostle Paul.

It should be clear that simply quoting a snippet from Scripture to those who are suffering could do more harm than good. Romans 8:28 is a prime example.

The apostle Paul was well aware that “a text without a context becomes a pretext.” In other words, anyone can co-opt the wording of a text, infuse it with a new (and therefore distorted!) meaning, and then use it as a slogan to rally people around his or her cause. Paul sought to prevent his readers from turning “All things work together for good” into a misleading and narcotizing slogan, by encasing it entirely within its protective hermeneutical context. He did so by using a well known literary structure that, unfortunately, most English translations obscure.

In antiquity, writers often utilized an A—B—A’ literary structure to highlight the important parts of their texts. In other words, they sandwiched a specific idea or concept, call it “B,” between two essentially identical ideas, call them A and A’ . So you might think of A and A’ as the bread slices, and B as the beef. [So, if you’ve ever asked yourself “Where’s the Beef?” Here’s your answer: “Sandwiched between A and A’ !”]

Now I realize that all this talk about literary “sandwiching” may be difficult for some of you to swallow. But since Paul serves the “beef” of Romans 8:28 in a literary sandwich, I think you will agree that it deserves at least a “courtesy bite.”

In the Greek manuscripts “All things work together for good” is sandwiched between, on the front end, “For those who love God” ( A ), and, on the back end, “for those who are called according to his eternal plan” ( A’ ). Both of these ( A and A’ ) refer to the same group of individuals. So the PROMISE “All things work together for good”—whatever it means—is specifically and solely for those who have accepted God’s forgiveness through Christ’s sacrifice and have committed their lives to God.

This promise is comforting to believers, but downright irritating to unbelievers.

“So everything works for good for believers, but not so for unbelievers? How fair is that?”

Like it or not, this is a legitimate question. To answer it, we will need to unpack the language of the promise itself and also take into account the broader surrounding context in which the apostle has framed it.

Answer to Murphy’s Law vs the Apostle Paul

On careful scrutiny, the promise “All things work together for good” presents an enigma. The expression “work together for good” implies some purpose or intention or goal, faculties typically associated with organisms possessing the ability to reason and act in voluntary ways, namely, humans. But the promise identifies the agent as “all things,” which in the original Greek means . . . are you ready for this . . . “all things,” so this includes inanimate objects or events such as natural disasters, illnesses, and accidents—things that have no purpose, intention, or goals of their own. This anomaly should compel us to probe the grammar and syntax of this promise more closely.

Unlike English in which the function of words in a sentence is indicated by word order, Greek uses a system of inflectional endings or grammatical “tags.” Occasionally a single inflectional ending can indicate more than one function. The translator must then decide which one of those possible functions makes the best sense of the sentence. Readers of the translation have absolutely no idea that an interpretive decision has already been made for them. Moreover, they have no clue as to what the other interpretive possibilities are. This is the case in Romans 8:28.

The grammatical “tag” on “all things” (one word in Greek) could indicate that it is functioning as the subject, but it could also indicate that it is functioning as the direct object. If “All things” is functioning as the subject, then the meaning is “All things work together for good.” This translation is grammatically legitimate, but, as we have seen, the resultant meaning is philosophically and theologically defective: evil things do not on their own work together for good. If, however, “All things” is the direct object, the meaning would be “He (i.e., God) works all things together for good.” This translation is theologically sound, but it suffers grammatically because the Greek verb sunergeo (“work together”) is usually intransitive, which means, it doesn’t take a direct object.

The best option is to understand the inflectional ending on “all things” as an adverbial accusative qualifying the verb by giving the arena of God’s working, hence, “In all things God is working together for good, for those who love him, that is, those are called according to his eternal plan.” It is God’s will and intention and purpose to bring about good for those who love him.

WOW! This sounds awesome! So awesome that we might be tempted to end our exploration of this verse right on this note, were it not for the fact that we have not yet answered the unbeliever’s charge that God is unfair in working good for some and not for others. In fact, we’ve actually made the problem worse by identifying God—not mere “chance” or blind “fate”—as the personal agent working all things together. What’s more, we also have not yet shown how pain and suffering can be understood as “good” in the usual understanding of that word.

We’ll explore these topics more in our Part 2 Video . But before you check that out, what’s your opinion on Paul’s words in Romans 8:28? Make sure you join in the conversation by leaving your comments below.