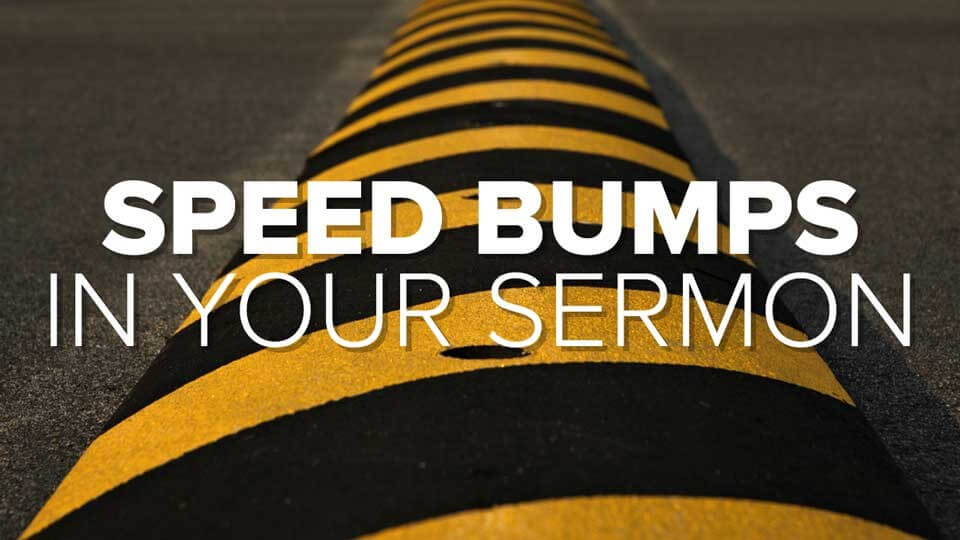 In my last video blog I discussed some examples of attention-getting introductions. In this video I want to offer some warnings about potential momentum stoppers, or as I call them “speed bumps” in the introduction. Speed bumps are meant to slow you down while driving through neighborhoods and parking lots. While we certainly want them in those places, you don’t want them in your sermon introductions.

Put another way, there are things you can say that slow down the momentum that a good sermon introduction is supposed to create. Let’s consider three examples:

1. Never begin your sermon with an apology.

Don’t say something like, “Look, folks, I just want to share with you from my heart, but I’m not prepared.” Or, “I apologize, but I just feel so nervous” or “The football game was on and I just didn’t have enough time to study for this week’s sermon.” You might think you are being transparent, but apologizing in advance for your sermon will lower your audience’s expectations, and you never want to do anything to lower their expectations.

2. Never begin your sermon with a threat.

I have heard sermons begin with, “Now some of you aren’t going to like what I have to say….” If you say this, the listener will likely believe you and put their defenses up. Instead, you can tell a story, a parable, or some other form of an inductive sermon that will require people to wait until the end of it to be confronted by its message. If you think your sermon has the potential to be offensive or controversial don’t tempt people to tune out, by threatening them in the introduction.

3. Don’t stop to pray after beginning your sermon.

The sermon introduction is supposed to get and keep people’s attention and that can be hard for them if after beginning the message you then ask them to close their eyes and bow their heads. Instead, think about praying before the sermon begins. This signals to the congregation that the sermon is about to start as well as putting everyone in the proper state of mind. I often include the following in the prayer I say aloud before the message, “Lord we have worshipped with our singing, and we have worshipped with our giving, and now help us to worship you with our listening.”

It’s my hope that preachers reading this will be part of the answer to that prayer, by not doing anything that would slow down the momentum in their introduction.

Speed bumps are for cars, not for sermon introductions.

So what are your thoughts on this? Are there any other speed bumps you’ve run into while delivering your sermon? Let us know by commenting below.