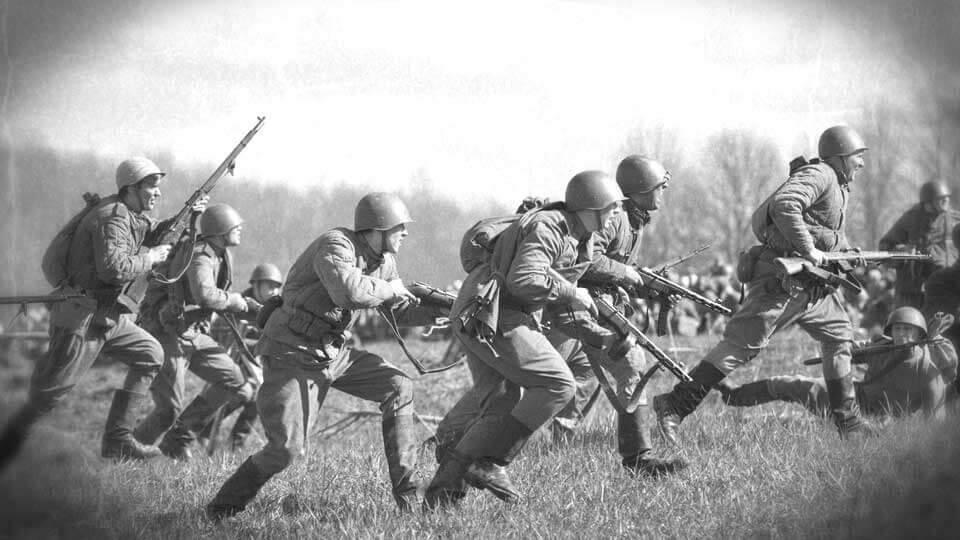 7 Interesting Features of World War II: One for Each Year

World War II has been the costliest conflict ever to occur on earth. It’s also one of the most varied and complex, with nations changing sides, citizens of one country fighting each other more fiercely than they fought outsiders, and a myriad of new and sometimes bizarre weapons. The war lasted exactly six years and one day, and certain features seem to stand out for each year of the war.

The war began on September 1, 1939, with the German invasion of Poland and a new variety of warfare, something called Blitzkrieg, or lightning war. Blitzkrieg was a tactic that emphasized fast-moving tanks and motorized infantry supported by German aircraft pounding the Polish forces in advance of the tanks. The Poles, by contrast, relied on such “modern” equipment as bicycles—some of their best units pedaled to war.

Blitzkrieg proved devastatingly effective in most cases–but not all. One such exception occurred at the Battle of Wizna. In this lopsided fight, 700 Polish troops, sitting in heavily fortified positions with a handful of artillery pieces, faced off against 40,000 German troops with hundreds of tanks and plenty of artillery and aircraft. For three days the Poles held the Germans at bay, inflicting heavy losses in men and equipment before finally being virtually annihilated. The rest of the country succumbed to the invasion in a few weeks, especially as Russian armies joined in to enter Poland from the east.

The attack on Poland was not, however, the only invasion of that year. Russia (more accurately, the Soviet Union back then) wanted Finnish land near the Russian city of Leningrad, so they invaded the little country. Surprisingly, Finland fought off the Russian onslaught for months despite being heavily outnumbered. Britain and France even made efforts to send troops to help Finland. At last, though, the Finns had to make peace, but they had inflicted more than four times as many losses on the Russians as they themselves had suffered.

War is often a matter of surprise. Ambushes, surprise attacks, and new and surprising weapons often determine winners and losers. Early in 1940, the war had wound down into something popularly called “Sitzkrieg,” a play on words indicating that not much was happening. The Germans were preparing a surprise for the French and British, however, an attack on a weak point in the Allied defenses called the Ardennes Forest, supposedly too rough for tanks and trucks to move through, so the Allies left it only lightly defended. However, it wasn’t really impassable for vehicles. The Germans made their main thrust through the Ardennes and completely broke through the Allied defenses.

On a smaller scale, the Germans used surprise to capture a major Allied fortress a few days later. The fort of Eban Emael was considered virtually impregnable, with massive concrete emplacements, remote control cannon, and underground passages. It was manned by over 600 men. The surprise this time was that the Germans came from the air rather than the ground. About 80 German airborne troops landed by gliders on top of the fort and captured it in a few hours.

More equipment—guns, tanks, trucks, planes, canteens, hats, everything—was produced in World War II than in any other war. In the final analysis, the outcome of the war was determined to a large extent by production. When the United States and Russia both came into the war against the Axis Powers in 1941, the potential production of the Allied side became far greater than that of the Axis nations.

About 16 million Americans and an equal number of Russians served in their countries’ military forces during the war, but their industrial production was just as impressive, especially that of the United States. The figures for tanks and airplanes tell the story for production as a whole.

If you add in the 132,000 aircraft built by Britain, you can see the tremendous advantage the Allied nations had in that weapon alone. It took soldiers, sailors, and airmen to win the war, but having a big advantage in equipment made it considerably easier.

World War II was the first war in which nations could strike the cities, factories, fuel supplies, and transportation lines of enemy nations from long range by air. This “strategic bombing” was used to destroy enemy production, interrupt supplies, and sometimes sap the will of the civilian population. Bombing wasn’t an uninterrupted success story, though, and sometimes the results were bizarre. For instance, in September 1942, the Japanese twice launched float planes carried by a submarine off the Oregon coast to bomb the United States. The incendiary bombs were dropped in a wooded region in an attempt to start a forest fire, but the fires didn’t amount to much. Needless to say, this did not affect the outcome of the war.

Some bizarre things happened on occasion during bombing missions. In one case in January 1942, a Russian airman bailed out of his damaged bomber at 20,000 feet. He lost consciousness before he could open the parachute, so he fell all the way to the ground, landing on a snowy hillside, which cushioned the impact. He recovered from severe injuries and went on to fly again through the rest of the war. One American and one British airman had similar experiences, the British sergeant not even breaking a bone.

When special operations forces are mentioned in World War II , it is usually in connection with the Allies. British commandos, and later, American rangers made a name for themselves in many daring operations, from the disastrous Dieppe raid to the hair-raising assault on Pointe du Hoc on D-Day. In North Africa, the British Long Range Desert Group established a reputation for swift and unexpected raids on enemy forces far behind the front lines.

The Germans, however, had effective special operations forces of their own that engaged in some of the most difficult missions of the war. In mid-1943 the Allies had landed in Italy, forcing that nation to surrender. Benito Mussolini, the Italian dictator and friend of Adolf Hitler, found himself arrested by his own people and held under heavy guard at an Italian ski resort. Colonel Otto Skorzeny received orders from Hitler to find and rescue Mussolini. Skorzeny and a group of German paratroopers and Waffen SS commandos crash landed their gliders on the mountaintop and quickly snatched Mussolini from his captors, then flew him to safety in Germany in an amazing mission.

The war was fought by units, some as small as a squad or fire team and others containing tens of thousands of troops. Occasionally, however, a single soldier might find himself on his own against the enemy. This situation was common in the days immediately following D-Day in the Normandy countryside where U.S. paratroopers scattered in night drops often fought solo against the enemy until they could link up with other American troops. Much the same thing happened in the Pacific as well. After U.S. forces had landed in the Philippine Islands, for example, Army Sergeant John R. McKinney single-handedly fought off an attack on his unit’s camp by a hundred Japanese soldiers. When the Japanese finally pulled back, McKinney had killed 40 of them, several in hand-to-hand combat.

Another kind of holdout was fairly common among the Japanese on the many remote islands where they had small garrisons. It was common years after the war for single Japanese soldiers to come out of the jungle, finally realizing that their nation had surrendered long before. The last of these was a lieutenant who didn’t get the word until 1974.

World War II was the first, and so far the only, nuclear war. Of course, the nuclear portion didn’t happen until the last weeks of the war when the United States dropped atomic bombs on Hiroshima and Nagasaki, trying to get the Japanese to surrender before it became necessary to launch an invasion of the Japanese home islands. The bombs were successful in forcing that surrender and making the invasion unnecessary, although at a cost of close to 100,000 lives in each city.

One Japanese man, Tsutomu Yamaguchi, actually survived both nuclear blasts, being in Hiroshima on business when the first bomb came, and being back in his hometown of Nagasaki for the second bomb. He eventually lived to be 93.

Ironically, Nagasaki was known as the most Christian city in Japan, with a sizeable Christian population ever since the 1500s, when Jesuit missionaries had converted many.

World War II was such a huge conflict, stretching from September 1, 1939, to September 2, 1945–six years and a day–that all of its individual stories will never be told.